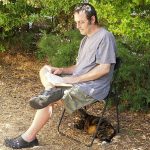 IT’S HIS INDEPENDENCE. IT’S watching him sleep. It’s his purring. It’s the feel and smell of his fur. (It’s also the smell of his paws.) It’s the way he closes his eyes when I pet him. It’s his occasional intense, extraneous-sound-ignoring focus. It’s the little gifts he brings. It’s his bonding-with-humans over a long period of time. It’s his gracefulness. It’s the way he demands attention and affection. It’s his wherever-the-humans-are sleeping preference. It’s his goofy self-amusement. It’s the way he asks to be put on the bed (by pawing the corner of the box-spring) or let outside (he stands up on the baseboard next to the door) or inside (he meows softly). It’s his varied vocalization. (It’s also understanding his varied vocalizations.). It’s the sounds he makes while eating. It’s that he’s my steady study buddy (click on photo at left to enlarge). It’s the way he stretches his legs. It’s his demonstration of yoga. It’s his eternal quest to Get The Red Dot. It’s gently prying his claws out of the fabric they’ve snagged in. It’s the calling of pet names (“sweet boy,” little man,” “Soft Tyrant,” et al). It’s the worrying if he’s okay. It’s watching him clean himself. It’s feeding him twice a day. It’s the way he attacks anything and nothing at all. It’s that he’s been our constant companion for nine years (so far). It’s his love of catnip. It’s the way he shifts his ears. It’s his curiosity. It’s the giving of skritches. It’s his luxurious response to skritches. Believe it or not, it’s the way he wakes me up in the middle of the night. And it’s the way he falls asleep with his head in my hand. 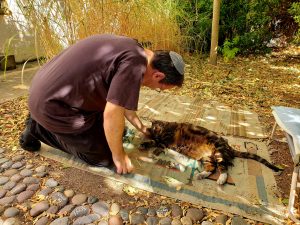 UPDATE: At 5:15 p.m. on 5/5/20, our Beloved Animal — riddled by incurable, painful cancer — passed into What-Was, courtesy of a compassionate and kind veterinarian’s home-visit. In pace requiescat, little buddy. Hope I see you later.

← The Loudest Silence
Words to Bring Back: “Rejoice” →

6 comments for “Why I Love: Geronimo Cat”