These fables are self-contained excerpts from the picaresque hopepunk work, The Cook For Any Price: Across the Rimless Sea. Because the tales encompass a world of spectacular landscapes and forgotten ruins, teeming with vastly different and occasionally commingled cultures, religions, prophecies, species and cuisines, those curious to explore it may benefit from the following helpful words.

ACROSS THE RIMLESS SEA LIE the Exilic Lands, where dreams come to die – or so say the coffeehouse wits of Soharis. But they are a cynical lot, and often fervent in their presumptions.

Here at the Sea’s southeastern edge, two abler-than-wise peoples anciently fought each other to land-cracking oblivion; their regressed descendants, the Xao and Xai, were left wandering the shattered plains and scorched forests with no greater legacy than a few artifacts, mutual blame, and a thin hope of future redemption.

This hope was handed across the generations through whispered legends of ocean-borne saviors who would restore to the Xao and Xai their once-lush countryside before graciously and conveniently withdrawing. Some believed this, others pretended to, and those who did neither made plans of their own.

Thus, when the Children of Uul washed ashore in three great fleets filled with agricultural necessaries, the Exilic Lands’ indigenes greeted them with a mix of joy, surprise and consternation. The Uulians were fleeing their own self-made and legendary catastrophe and, according to the Flickering Gods as interpreted by their Sacreants, had reached where to repent and prove themselves worthy to return to their lost homeland.

Self-absorbed and heedless of their role in the local mythology, the newcomers could comprehend neither the indigenes’ initial amazement nor their eventual irritation as diligent Uulian fingers restored the land – and then built the Three Cities and Thousand Villages of the Uulian Commonwell. While the Xao and Xai grew more perplexed by the century, the Commonwell ripened into that state of elegant decadence without which no civilization can quite be called interesting. Still, some (indigenes and Uulians alike) continued to believe in their ancestors’ prophecies; others pretended to; and those who did neither made plans of their own.

One did all three, often at once and sometimes with modest success. His name is Prosatio Silban – self-defrocked Sacreant, mercenary cook, and subject of these tales. 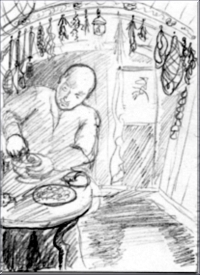 2 comments for “Preface: Across the Rimless Sea”