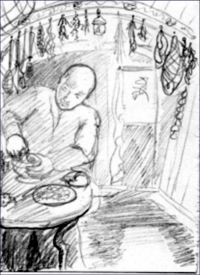 PROSATIO SILBAN WAS NOT KNOWN for nothing as “The Cook For Any Price.” He had long ago foresworn the Sacreanthood and serving people’s souls, for serving their bellies and letting the souls look after themselves. Yet every now and again, he wondered if The Flickering Gods were still playing tricks on him.

He was cleaning up his galleywagon late one night at the edge of one of cosmopolitan Soharis’ more workaday fish markets, making ready to fold down the ‘wagon’s canopy-awning, when the Siddis appeared.

Now, to understand this story, you must know that Soharis, a city perched where the Rimless Sea meets the Uulian Commonwell, is the sort of place where one may expect to meet almost anyone at almost any time. But at that, it is rare to meet a Siddis — more properly the Siddis, since only one at a time has ever been seen anywhere, and of that tall, swarthy, rose-red-robe-wrapped one little is known save that they or he lived somewhere in the Sandy Eastern Waste, and that their or his presence portended unsettling things.

Prosatio Silban was intrigued. He was also tired from a reasonably profitable day selling mumblefish skewers and goat pasties to Soharis’ shop-clerks and porters and was looking forward to putting his feet up. But he could not deny a hungry customer.

“Good evening, sir. With what may I please you?”

The Siddis’ voice was like a hot wind whispering over dunes. “I want a bowl of jaraanga beans. What is your price?”

“I must awake the stove, sir, and put on a fresh batch — two coppers and a quarter-hour’s wait.”

Jaraanga beans are easy to fix, once the stove is hot: a handful of the small yellow yo-yo-shaped beans are simmered in a pint of water until they flesh out into a tapioca-like mass tasting faintly of garlic and green peas. While they cooked, Prosatio Silban attempted the usual friendly banter about the weather and the afternoon’s martial games. But the Siddis only looked at him.

“Those games are of the moment. Lend me your ear and I will fill it with something you will remember forever.”

Intrigued, Prosatio Silban asked him to elaborate. The Siddis began:

“My lands are not like your lands. Only the falcon and the serpent keep watch over wastes of rock and sand. But at night, we see the stars like no other men see them.

“There is an abandoned city in the desert, built by men who once were wise. They came to know that the stars and men were related — that the movements of one could be read in the movements of the other. Think of it! That the motions of something without this world be threaded inextricably with something within. The knowledge of what-is-to-what is great, for the man who can read it closely. And the secrets of what-is and what-may-be filled the libraries and minds of the men of the city.

“Now you may think them wise, but they were wise unto foolishness, for in seeing the stars they ceased to see themselves. For the stars are cold and hard and distant, demanding nothing more than to be worshiped in silence. And so the men sat in their city, their fine city of unnumbered mysteries. And so they worshiped.

“And so they slowly starved to death.”

The smell of garlicky peas dragged Prosatio Silban’s attention back to the stove. He filled a bowl, placed it on a painted bamboo tray, added a cloth napkin and wooden spoon and brought it to the Siddis’ table-and-chairs. He wondered what to say. The Siddis spoke.

“I? I sometimes think the gods have me. I try to let them alone, in hopes they’ll leave me alone. I find it’s best not to be noticed by a god — even of one’s own making.”

The Siddis smiled. “It is rarely worth the risk.”

2 comments for “Prosatio Silban and the Visitor From The Sands”