He was a man. Take him for all in all. I shall not look upon his like again.
— William Shakespeare, Hamlet

WHEN I FIRST MOVED INTO an Oakland apartment in 1986 with John Woods “Wheels” “Spoonhead” “Calvin Biggins” Wheeler, our mutual friends were laying bets as to who would kill who first.

“We’re both so obnoxiously self-aggrandizing,” John told me. At that point in my life, I couldn’t argue with him. We were in our mid- to late-20s, after all, and such things are expected of young men. But John was one of a very rare kind of man — funny, wise, well-read, educated both by institutions and life, an excellent cook, a devoted gardener, an amateur naturalist, a good listener, and very easy to talk to. He could make friends with anybody, and often did. When I first met him, c. 1981, he was wearing a dashiki, singing an off-colour Dickensian ditty and carrying a movie reel under his arm (he worked as a deliveryman for the Diablo Valley College audio/visual department). “Who’s THAT?” I thought, and struck up a conversation. I don’t remember what we talked about, but he wound up inviting me to his Pleasant Hill apartment for a party later that week. It was my first encounter with Renaissance Faire folk, a relationship with which I was to nurture and enjoy for (so far) the rest of my life.

John’s life ended unexpectedly near midnight on July 10/11, when he was struck by a pickup truck while bicycling home from a Concord bar (the brief newsweb article may be found here). John was an experienced and avid cyclist; he had worked as a bike messenger in San Francisco for many years. When I was laid off from a Berkeley printing office during the early part of our roommate-hood, he talked me into messengering as well, even lending me his spare bike so we could shuttle across the Bay Bridge together morning and evening.

Because of John, I did a lot of things — and not only because I’m something of a pushover. I learned how to play the doumbec, a large hand-drum capable of a range of sounds; how to cook beef heart (by first pounding the devil out of it with a tenderizing mallet); how to enjoy the sublime work of Robert Crumb; how to hike six miles at night to find a perfect Druidian oak circle; how to flip butter-pats onto a restaurant ceiling; how to get kicked out of a restaurant for inadvertently flipping butter-pats onto the next table; the list goes on. 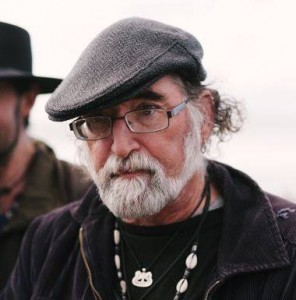 In 1989, John realized a years-long and much-talked-about dream of equinoctial hiking to a remote Northern California beachside with a group of like-minded adventurers where we could pound drums, sip alluring concoctions, tell stories, howl at the moon, and just generally act like Men-in-the-Wilderness. (The picture at right was taken earlier this year during the 30th such gathering; I went to the first ten, before ill health forbade me from further attendance.) Over the years the Male Bonding Ritual became the high point of the lives of more than 40 men (and, no doubt, their wives and sweethearts). Dread and terrible oaths keep me from sharing any further details, but rest assured, a splendid time was engineered by all.

Larger-than-life people are becoming a rare commodity in this world. I feel fortunate and grateful to have known a few, but the list is getting smaller every year. Every day is last call for someone; last week was John’s turn. Ride on golden wheels, John. I hope I see you again.

10 comments for “Fie on Death, and the Pale Horse He Rode In On”