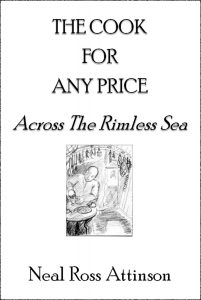 PROSATIO SILBAN ONCE MINISTERED TO the souls of the Uulian Commonwell’s faithful. But now, his heartfelt devotion is to tend the palates and gullets he encounters on his journeys as a mercenary cook. Inspired by Don Quixote, J.A. Brillat-Savarin’s The Physiology of Taste and the Dreamlands stories of H.P. Lovecraft, these tales are part culinary tour and part spiritual adventure. Join the Cook For Any Price on his strange and episodic quest to serve the epicurean wealthy, the bowl-of-beans poor, and everyone in between.

NEW!! Volume Two, More Commonwell Tales, is now available! It’s back to the Exilic Lands for our dauntless and resourceful holyman-turned-chef, where he seeks rewards both profitable and profound in a world unlike any you’ve ever visited.

See what readers are saying:

Ransom Stephens, author of The Book of Bastards
“Sometimes you just need to let someone else deal with the BS of life. … Prosatio Silban is the man for the job!
“This intrepid chef travels a world that reminds you of places you’ve been, places you’d like to go, and places you’d prefer to avoid. With his old-school (really old) food truck, he achieves a view of the world (well, a world in a different time and a different place (a very different time and place)) that’s sort of like Norman Rockwell would have had, if he’d been in that very different time and place. All the while, he leaves your mouth watering with recipe ideas! Semi-seriously, it’s sort of like Patrick Rothfuss meets Julia Child.

END_OF_DOCUMENT_TOKEN_TO_BE_REPLACED

THE SMALL BOY AT SONOMA Plaza came running up to the ducks.

Great, I snarled to myself. Just what we need — another damn kid chasing the local waterfowl. Why can’t they leave the birds in peace?

As I considered this, he turned from the flock and ran to an old woman in a wheelchair. “Would you like to feed the ducks?” he asked with youthful enthusiasm, offering her two slices of rye bread.

WHILE HITCHHIKING BETWEEN PLACERVILLE AND South Lake Tahoe in 1985, my ride — who had just offered me a beer — taught me a valuable lesson on which I still reflect constantly: “When you’re on the road, and someone wants to give you something, take it.”

People like to help. So much so, that when you refuse said help, they feel at least annoyed and at worst, insulted. Whether it’s carrying something, taking something, getting ahead of them in line at the grocery store, or whatever, it makes a vital human connection between otherwise-strangers. We all like to feel needed; and when someone else implies that we’re not, it grouses us on a visceral level.

In Lower North America, we pay a good deal of lip-service to the Rugged Individual who’s admonished to “stand on your own two feet.” But that gets lonely after a while. When that loneliness-wall is breached, it feels good — both to the giver and receiver. And who wants to refrain from helping someone feel good?

So the next time you receive an offer of help, acknowledge it with a cheery “Thank you.”. It’s the human thing to do.

WHEN THE CHICKENS COME HOME to roost, there is often confusion in the henhouse.

What a strange dream, Prosatio Silban thought, sitting up in his sleeping-berth. So vivid. So compelling.

Then he caught his breath and listened.

Someone or something is here in my galleywagon, he thought.

END_OF_DOCUMENT_TOKEN_TO_BE_REPLACED

WE HAVE READ MANY TIMES of the Heirs Second, who rule the Uulian Commonwell by solemn duty and occasional whim.

But who rules the Heirs Second?

Late one night, Prosatio Silban was hard at work scrubbing the inside of a large copper boiling-pot. A wave of frustrated fatigue washed over him; he had several times passed the vessel through his immaculator – a wide bone-hoop set on a heavy ironwood base, whose magik could (in theory) remove even the most intractable stains. However, after several passes, his work was still without any visible result. So it was no wonder that his surly mood was further aggravated by a loud knock at his galleywagon door.

It’s no longer the hour for visitors – and I should be abed myself, he thought, stepping with soft tread across his ornate braided rug and grasping a doorside cudgel.

END_OF_DOCUMENT_TOKEN_TO_BE_REPLACED

NO ONE HAS YET DEVISED a satisfactory agency for long-distance intimacy – but in every world, there’s at least one that tries.

With a protracted high-pitched scream, an enormous emerald-hued bird circled Prosatio Silban’s galleywagon in descending spirals as the vehicle made its careful way along the tamped-earth road between the villages of Bottle and Wardhaven.

At last, the cook-errant thought, and smiled in anticipation.

END_OF_DOCUMENT_TOKEN_TO_BE_REPLACED

“WHO IS WISE?” ASKS THE old sage-monk – and answers: “One who learns from everyone.”

Prosatio Silban squirmed in his damp sleeping-berth for the hundredth time, then finally rolled himself out of it and onto his feet. ENOUGH, he thought, passing a hand over his sweaty face and rubbing his wet fingers. Perhaps it will be cooler outside. I hope.

END_OF_DOCUMENT_TOKEN_TO_BE_REPLACED

SOME KNOWN THINGS SHOULDN’T BE.

Prosatio Silban glanced up at epicurean Pormaris’ massive dockside clock-tower, an accurate timekeeper and source of immense civic pride. A quarter-hour past fourteen, he thought. My customer should be arriving soon – and aha! here he is.

An almost-shabby youth clad in an academic’s robes shuffled his hesitant way through the makeshift lanes of the grand city’s fabled South Market, a packet of scrolls under one skinny arm. Seeing the Cook For Any Price, lodged between a fatberry-oil presser and seller of imported curios, he broke into a brief half-hearted smile and sat down at one of the two empty tables-and-chairs.