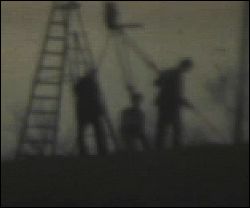 THE LAST MAIL-ART PROJECT I “did” was a series of one or two audiocassette collages with (sub)genius co-conspirators Alan K. Lipton and David Wilson circa 198x-199x. We’d record a bunch of weird stuff and send it on to the next fellow to “see what [he] could do with this here tape … rearrange it, delete anything, add anything” (as David growled at some random 3 a.m.). Listening to it evolve, with bits of past tapes peeking through the mix like enigmatic epitaphs, brought a satisfaction like no other: an aural jigsaw puzzle assembling itself from cracked refractions.

That spirit of collegial creativity is one of the ideas behind Do Not Screen, a website which purports to present the contents of a mysterious red box in the “vast remoteness of Northern Michigan.” The contents included hundreds of cut-up 16mm film strips and a variety of other documents, some retrieved from envelopes marked “DO NOT SCREEN:”

Rather than re-assemble the film myself, I am, in the spirit of analog, snail-mailing frames from the film as well as a url with a corresponding activation code to scholars, students, theorists, film buffs, cultural anthropologists, writers, artists, editors, and others. In collaboration with the Critical Media Lab, I will manage a database that will reassemble the film in its proper order, with each frame-series (the strips of 12 frames) being activated as frame recipients log onto the website and enter the unique activation code that corresponds to their film strip. The more people who enter their frame numbers, the more complete the film will be.

Under a lens, the strip I received in the mail last week seems to show a group of 50 people dressed in cold-weather 1940s businesswear standing around someone’s backyard. The accompanying handwritten document, brown and crisp with age, was a labor receipt for ash retrieval and ditch filling. The whole exudes a creepy and cool aura, and I can’t wait to see how it all turns out.

2 comments for “Consensual Art: Do Not Screen”