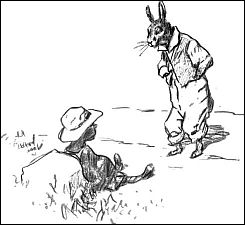 ONCE UPON A TIME, BEFORE minorities realized they were being patronized by pop-cultural stereotypes and decided to do something about it, there was a literary MacGuffin known as a “tar-baby.” This item featured highly in the Joel Chandler Harris story “Br’er Rabbit and the Tar-Baby,” where one of the funny animals makes a baby out of tar to trick his enemy into arguing with it, striking it, and finally being englobed by it. A fine family tale enjoyed by generations.

Here’s where history trumps metaphor. And why I need your help.

Since the “tar-baby” was made from tar to counterfeit a Black child, the term has been derisively used by enough stupid White people to make Black people not want to hear it any more. But the metaphor itself — something that consumes you the more you try to attack it — is still useful and needful, perhaps now more than ever. As the title of this blog implies, I am not one to easily let go of a good metaphor — but neither am I stupid enough to suggest that Black people “get over it.” (Here’s who should “get over it” — everyone arguing against “political correctness” in order to mouth their favorite bigotry.) I am, however, naive enough to suggest we dress it in other clothes.

We need a new metaphor, and one that doesn’t hurt people’s feelings. (I have already submitted for your approval “Don’t Poke The Squid,” but that’s not quite the same thing.) We at The Metaphorager ask you to put on your thinking caps and join the Metaphoric Nation in figuring this one out. Add your submission to this post in the form of a comment (clicking the post title will invoke a commentable page), or email it to scoop at sonic dot net. (Winners get a year’s free subscription.) The future of our language is in your hands.

7 comments for “The Tar-Baby Problem”