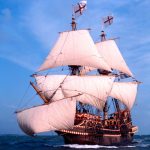 IF I HAD KNOWN THAT our galleon would collide with a freighter, I would have worn a life jacket.

The time was February 1988. Through a curious series of circumstances, I had signed aboard the replica galleon Golden Hinde II a few months earlier as a deckhand and docent, sailing around the Bay Area and down the California coast giving tours of our fine ship. Our plan that night was to motor (yes, we had a small engine) from San Francisco to the Farallon Islands, then sail down to Half Moon Bay. We left San Francisco well after midnight in order to take advantage of the outgoing tide, and were soon past the Golden Gate Bridge and into the open sea.

A cold and foggy 3 a. m. found me atop the foredeck on bow-watch (front lookout) with a couple of other chilly souls. Visibility was limited to less than a hundred yards in all directions. We had a hand-cranked foghorn that we sounded every minute or so. By chance I cast a look backwards — to see a bright light looming out of the fog off the left rear portion of the Hinde. The light was quickly joined by and to a towering ship’s prow. Headed straight for the middle of the Hinde.

This isn’t a movie, I thought. We’re about to die.

“Ship approaching off the port quarter!” I shouted. “HARD A STARBOARD!” called our captain to the helmsman, who responded immediately. The Hinde began a slow wallow to the right.

Atop the foredeck, I flashed on the scene from the end of Moby Dick where the whale’s headbutting of the Pequod flipped a sailor out of that unhappy ship’s crow’s nest. “I know this is a cliche, but it really has been nice knowing you,” I told my foredeck companions, adding, “I think we’d better get down to the main deck.” I thought that since it was closer to the waterline it might be (relatively) safer.

We alighted on the main deck just as the Hinde was rammed amidships. The helmsman had managed to turn us to an oblique angle to the other vessel, so we were struck only a glancing blow. But it was enough to heel us over almost 90 degrees, crush part of the port rigging near the waterline and rain another part onto the main deck. One of my mates almost slid off the deck into the frigid waters; I clasped her hand and held on tight until the Hinde righted again.

As the departing freighter was swallowed up by the enshrouding fog, I shook my fist at it and cursed. I wasn’t alone. After our ship slowly stabilized, the first mate mustered everyone from below decks and took inventory. Everyone was safe and nearly sound, albeit shot through with adrenaline. Despite the impact, the Golden Hinde was mostly intact and shipshape (except for the aforementioned rigging). But we changed course and headed straight to Half Moon Bay to effect repairs and open for business.

We never did reach the Farallons. And now, whenever I go boating, I always put on a life jacket.

← And Now, A Moment of Science
First Graf(s): The Book of the Damned →