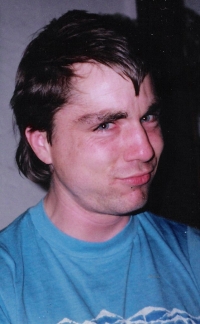 The attached photo of you arrived from a mutual friend two days ago, on what should have been your 48th birthday. I say “should” because it’s a primate conceit that the world be arranged according to our convenience. Were that the case, I’d likely be talking to you now, and about something differently substantial, instead of typing into some corner of the void you’re now a “part” of.

This is your famous, default and well-known “ohc’MON” expression which, although the photo is dated 1990, remained unchanged (though perhaps just a wee bit more crinkled around the eyes and soul) when you died in december of 2002, some seven years and a few lifetimes ago. The email which carried this photo also carried a few words typical of those for whom your death was — is — very difficult. I’ve written about it, and so has Ann — this groundbreaking (in the sense of earth-shattering, in the sense of a whole lot of people suddenly feeling the ground drop out from under us when we heard we’d no longer all sing, hike, complain, dream, contradict, listen, drum, dance, argue, plot, scheme, critique, criticize, comfort and sharpen together ever ever ever again) death of someone who was everyone’s best friend. They say things like “never before or since have I experienced such a profound personal loss,” “a sane freak, and you must understand that the term “freak” is a compliment” and “God, I miss that little sh*t!”

Anyway, you missed a few things — chief among which was that the lightsaber battle we wanted to see since we were 16 was far, FAR cooler than we EVER imagined, although it paled a bit given what’s become the cultural context of SFX in general. But on the other hand, that cultural context has become a lot more coarse than we thought it would back in the summer apartments of 1981 and 2 when we thought wulgarity for wulgarity’s sake was funny doody. Meanwhile: full frontal nudity isn’t yet on the MAJOR networks; the jetpack problem alas remains unsolved; our futuristic disaster scenario seems to be ecological rather than an alien menace (although don’t forget Apophis!); and you won’t believe what you can do with a cellphone nowadays.

In return, we missed you. Still do — me, mostly when I want to bounce an idea, or check a perspective, or gloat. And we will continue to miss you, despite this sudden, beyond-the-grave exhortation for all of us to get over it. You don’t know how tempting it is to lament that you left the party before it was over, raise a glass to absent friends, and collapse in a puddle of elegies — but you’d just flash that grin again, knowing that at some point in the future, we’ll either all meet again or something else as makes no difference.

I remain, Sir, your humble and obdurate Colleague,

← The Brotherhood of the Dunk
ORL History, or Where’s Mine? →

3 comments for “Letter To A Dead Friend”