HOLDING A PLANET IN YOUR belly may not sound easy — or perhaps even possible — but it is also supremely satisfying in ways that are still becoming evident.

Put another way, it occurs to me that, following Wednesday’s decloseting, I should drop at least a note about the spiritual/wholistic aspects referenced therein. Today’s bit: Contemplation. 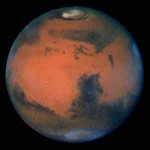 Merriam-Webster defines “contemplation” as “concentration on spiritual things as a form of private devotion/a state of mystical awareness of God’s being” as well as an act of “considering with attention” and “regarding steadily.” My experience tells me that the latter invariably gives rise to the former; I can’t contemplate something for more than a few minutes without going into what might be called “ecstasy” or “rapture.” (More about that in a sec.)

The first time it happened, or rather the first time I noticed it, was about five years ago when I was studying a high-definition Hubble photo of Mars (Fig. 1 for a smaller version). I was concentrating on the beauty of Mars’ thin atmosphere (the bluish tinge around the planet’s edge) when I suddenly … got it. I felt the ball of rock floating in its puff-shell of air with absolutely Nothing around it. And I felt this deep in my abdomen — as though the photo were somehow transformed to tactility.

Needless to say, I was both fascinated and elated; I think the elation came from the novelty, whereas the fascination feels like contemplation/attention-squared. Thinking about it now somewhat brings back the sensation: like having swallowed a lumpy sphere of dried mud with thin mint wrapper. What strikes me most is both the vividness and the sense that the image is somehow inside me; as though I can touch it with invisible fingers, rolling its solidity in my mind and gut simultaneously. (I told you this might sound crazy. But for all I know, everybody can do this.)

For what it’s worth, here’s my technique (I’ve never done any formal meditation study, preferring to go “by the seat of my pants”): Sitting comfortably, I clear my mind of distractions with “triangle breathing” (inhale for a count of four, hold for four, exhale for four, repeat) and focus on the object before me, loosely considering the following questions: What can I see that a casual glance won’t reveal? What is its sense of weight? How does it mark the line between itself and the surrounding space? How does the surrounding space envelop it? What is the object’s purpose? What was its maker trying to accomplish? What does it feel like, hanging in the scale of your mind?

Since beginning this practice, I’ve noticed an increase in my sense of empathy and all-round attentiveness. (Although that could come from spiritual/wholistic practice in general.) I’ve also applied this practice to non-physical nouns such as truth, beauty, love, etc. and even to music, although that’s a bit trickier due to music’s linear-through-time structure. But as with anything, sincere diligence will yield results.

Up next: The line between ecstasy and horror is sometimes invisible.